When learning to write music in four-part harmony in root-position, it can seem quite daunting for the novice. There are so many things to avoid: parallel unisons, fifths and octaves; melodic movement by an augmented second or a tritone; awkward leaps, et cetera.

However, all of these solecisms can be completely eliminated by following two simple rules, each having but one exception. Before I reveal the rules and their exceptions, I must stress that they only apply to four-part harmonic progressions in ROOT-POSITION; that is, when progressing from one chord in root-position to another chord, also in root-position.

When the bass moves by STEP, in either direction (up or down, silly!), all three of the upper voices (soprano, alto and tenor-DUH!) must move in the OPPOSITE direction from the bass; if the bass moves UP, the other voices must move DOWN to the nearest available chord-tone, and vice versa. This method ensures that there will be no forbidden parallel intervals and that the voice-leading is as smooth as possible.

In the progression V-VI, the bass moving UP by a step, whether in major or minor mode, conduct the upper voices downwards in accordance with the rule, BUT resolve the leading-tone UP a semitone. This will result in a doubling of the 3rd in the VI chord (instead of the root, as is usual), so keep this in mind when proceeding to the next chord, as some irregularities may result otherwise. 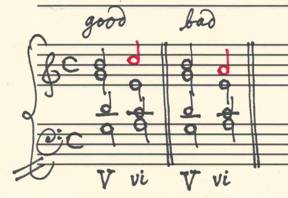 When the BASS moves by a SKIP (3rd, 4th ,5th or 6th ), in either direction, retain any tones the two chords may have in common in the same voice, while the remaining voice or voices are moved to the nearest available chord-tones. If the bass moves by the skip of a 3rd or 6th, there will be two common-tones; if it moves by the skip of a 4th or 5th, there will be only one common-tone.

NOTA BENE: If the bass moves by the skip of a 7th, it is treated as having moved by a step in the opposite direction, and so, RULE #1 would apply.

In the progression II-V, DO NOT retain the common-tone in the same voice, but move the three upper voices DOWN to the nearest available chord-tone; this applies whether the bass moves up a 4th or down a 5th. This exception is especially important to observe in the minor mode, here it is used to avoid the melodic skip of an augmented 2nd.

By strictly following these two simple rules and their exceptions, with a little practice, one can easily learn to master handling four-part harmonic progressions in root-position.

Of course, matters become trickier once inversions are introduced; the question of

doubling creates so many variables that most harmony students find themselves falling into traps again and again. Many will long for the good old days of writing exclusively in root-position, when they had merely to abide by a couple of rules to avoid getting mired down in quicksand! I will expound on some of those pitfalls at a later date. Meanwhile, try putting the rules presented here into practice until you become fluent in conducting four voices in root-position. ENJOY!