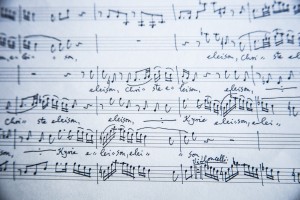 I am composing a Requiem for my brother, James, who passed away in the Spring of 2011. I can only work on it a little at a time, since I find this project quite daunting, as well as emotionally exhausting. At the current rate of progress, I expect it will take me years to finish it!

Thus far I have completed only the first of five main sections, and I am about halfway through the text of the Sequence, unquestionably the greatest Latin Liturgical poem ever written.

The five sections are:

My score is tentatively laid out for four-part mixed chorus, four vocal soloists, two violins, three trombones, bass and organ continuo. Later on I may or may not add two trumpets and timpani. The overall key of the work is D-minor.

The first section, Introitus et Kyrie, can now be heard on my website or on Soundcloud in a computer-generated “performance” (unfortunately lacking the Latin text), prepared for me by my friend and pupil, Jackson Macor. If you listen to it, feel free to leave a comment.

The opening (Requiem æternam) begins quietly, with the chorus supported only by the basso continuo. After a cadence in D-minor, the violins enter to accompany a short line for soprano solo in F-major. This is followed by the first forte passage for the full ensemble at the words: Exaudi orationem meam. (Hear my prayer.) After some modulating sequential repetitions, there is a cadence in G-minor, immediately leading into a triple canon on the next line of the text, which ends with a half-cadence in D-minor, ushering in the quiet return of the opening music for the reprise of the Requiem æternam. This time, after the full-cadence, there is a short passage which repeats the last few words of the text, culminating in a half-cadence in the tonic marked with a fermata. The Kyrie which follows is cast as a double fugue, with simultaneous supplications of Kyrie eleison and Christe eleison.

The fugue consists of three expositions, each more compact than the preceding one, connected by two short modulating episodes, the second one slightly longer than the first. The climactic ending features the first subject in stretto, a dominant pedal-point leading to a full-cadence and a big, emphatic plagal cadence with a final tierce de Picardie, bringing the section to a close on a D-major triad.

Next time I will tell you about my plan for the Dies Iræ and disclose some of my working methods, albeit with the ubiquitous caveat: “Please don’t try this at home!”