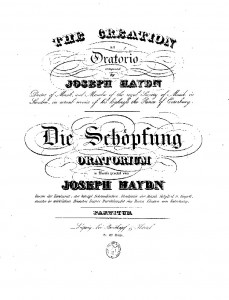 Earlier this month I attended a performance of Franz Joseph Haydn’s magnificent oratorio, THE CREATION, at Woolsey Hall in New Haven. This immortal masterpiece is one of the pinnacles of artistic achievement; I refuse to miss any local presentation of it!

This time I went with two of my piano students, a woman and her 14-year-old son, along with the woman’s youngest son, who had just turned 9; during the concert I sat between the two boys.

At the intermission following the mighty chorus, “The Heavens are Telling the Glory of God”, the younger boy immediately exclaimed, “At last I know the true definition of music! It’s not that awful stuff they teach us in school!”

Later, when I asked him if he liked it, he replied, “Are you kidding? I’m OVERJOYED!!!” Then he reiterated what he had said earlier, ipsissima verba!

His mother and his elder brother were also blown away by the sheer beauty and power of Haydn’s music; none of them had ever even heard of Haydn, and now they were hooked! I absolutely love it when I can introduce people to great stuff that will enrich their lives for years to come!

All the way home the younger boy kept asking his mother if he could take piano lessons!